Thanks for playing Blast Rush! Use this manual as reference for all features of the game, including finer points not shown in the How to Play tutorial mode.

The war with the alien horde has gone long enough. Your mission was to infiltrate the enemy mothership and destroy their energy core. The good news is you did it, but from here, the only way out is the access tunnel; a humongous corridor stretching across the entire mothership. It’s a straight shot, but the remaining reinforcements are determined to keep you inside. Worse yet, the mission’s left your ship’s machine guns overworked and weakened. Shooting your way out isn’t an option, but your arsenal of bombs is still primed and ready to go, and it’s your best chance to survive. Kick your thrusters into full power and rush to victory!

If it’s your first time installing and playing Blast Rush, you begin with How to Play, a brief interactive tutorial to learn the basics of the game. After completing the tutorial, you’ll automatically enter Standard mode to try your hand at blasting. Press the “Skip” button in the upper-right of the screen at any time to exit How to Play and go straight to the main menu.

More info on these selections are found further in this manual.

Touch and slide your finger on the screen to move your fighter ship. You can fly freely around the tunnel, but enemies will often appear from the top and sides of the screen, so stay alert!

TIP:
You don’t have to keep your finger on the ship; you can touch anywhere on the screen as if moving a cursor.

Firing bullets: The ship’s machine guns automatically fire bullets at all times. They may be weak, but they might still work!

Blasting: As long as you’re moving (touching the screen), the ship repeatedly fires its bomb, keeping enemies at bay. (This works differently for the Crystal Heron ship; see “Ships” below.)

Gusting: Move the ship horizontally one way, then quickly fly in the opposite direction to “kick up” a burst of air that can destroy enemies with the same power as bombs. This “gust” technique may save you in a pinch, clear out more enemies during a Hyperdodge, or boost your score (see “Standard” for more).

TIP:
Be careful — an over-reliance on gusting movements could destroy YOU!

Tap the upper area of the screen around the score display to pause. This brings up the pause menu, where you can restart the game from the beginning with the same ship and game mode, or exit to the main menu. Tap the same upper area to resume play.

BR-15:
A ship that’s been in service for many years, but is reliable as ever.

BOMB TYPE: Direct
A charge explodes directly in front of the ship.

Dignity Saber:
Part of an elite fleet of the galaxy defense force.

BOMB TYPE: Lob
A grenade flies forward for a moment before exploding.

TIP:
In addition to its powerful bomb, the Crystal Heron’s bullets are just strong enough to destroy enemies faster than the other ships.

The two types of regular enemies are what you’ll the see the most — small drones meant to hinder your progress by coming at you in large numbers. Their only difference is their appearance.

Big Eyes are tank-sized peacekeepers. While imposing, they’re slower than the others, and deployed in fewer numbers. Some can even open their “mouths” to release regular enemies. They take two bomb or gust hits to be destroyed, and bullets definitely won’t work!

TIP:
It’s possible to destroy regular enemies with bullets in any ship, but the enemies would have to move very slowly. In other words, it’s best to blast.

Hyperdodge emblems will regularly appear in the tunnel. Don’t miss a chance to grab one! The Hyperdodge power slows time when an enemy enters a certain radius of the ship. You can hold up to nine emblems, and each is spent automatically once the effect begins.

You have only a few seconds before the Hyperdodge effect ends, so use the time wisely to move out of danger or clear enemies from the immediate area. You cannot pause the game during Hyperdodge.

TIP: Change the position of the Hyperdodge status icon via the Settings menu.

In this mode, escape the enemy mothership by making it through 40 waves of enemies. You gain points for every enemy you blast away. Rush to the end and get the high score! 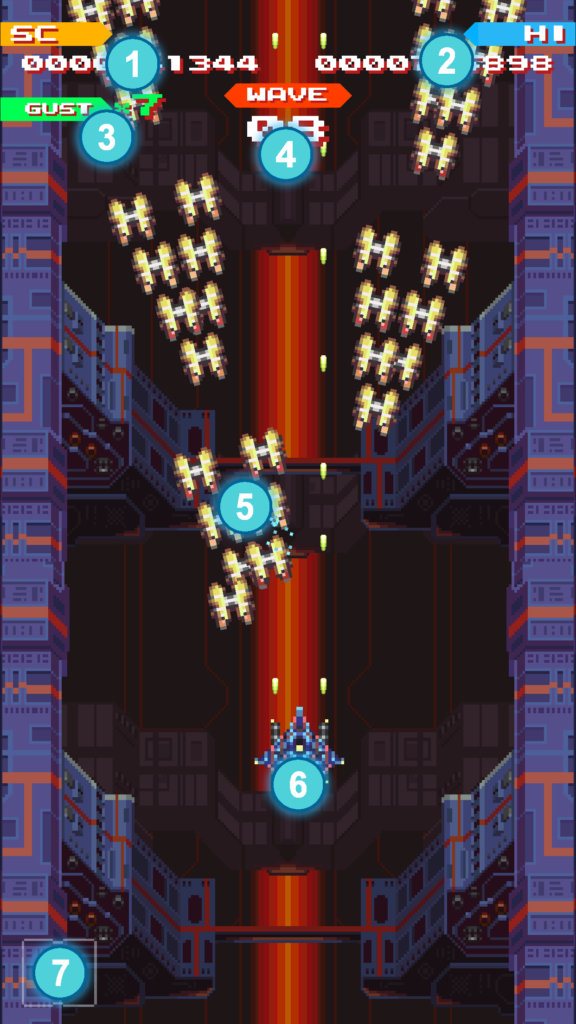 The secondary aim of Standard mode is to record high scores. To start, you get one point each time a bullet hits an enemy. You get more for destroying them:

In 2-Minute Mode, you’re given two minutes to increase your score as much as possible. Balance your skills in bombing, gusting, and dodging to acquire the most points in a short amount of time.

When time is up or your ship is destroyed, you’re awarded bonus point values based on your initial score, time spent, and how many enemies you destroyed. Surviving till the end will net the maximum time bonus, and when combined with the destroyed enemy count, this can tremendously boost your score.

How long can you stand an endless stream of enemies? In Endurance mode, waves come at you in randomly-chosen patterns! You’ll encounter waves from Standard mode and several original patterns.

Unlike Standard, Endurance mode has no score — your record is the most waves you survived!

Endurance 2-Minute Mode follows the same rules as Standard 2-Minute Mode: survive and destroy as much as possible to boost your score.

Considering the differences of Endurance, 2-Minute Mode adjusts the endgame bonus based on the number of waves passed, in addition to time remaining and enemies destroyed.

Visit the Settings menu for these options and sections: